The best way to experience Croatia is on our exclusive Croatia Island Hopping Explorer cruise. We will present the Adriatic like you have never imagined in a mix of history, culture, nature, food and adventure. Our Explorer cruise provides highest level of comfort on our deluxe mini cruiser, with air conditioned private en suite cabins.

After arriving in Spit we will be embarking the ship. The ship has the total capacity of 40 +1 guest, accommodated in 20 double or twin bed cabins. There is a single cabin for a guide. The cabins are situated on main and under deck. The cabins are equipped with air conditioning, safety deposit box, hair dryer and basic hygienic products. The dining area is on the top deck and the lounge area is adjacent to it. There is also a large sun deck with a pool and an outside shaded lounge area. Wi-Fi is available on board. On board of the ship you will have full-board excess and equipment for using during you stay (Diving Sets, Snorkelling gear, Fishing gear, Sup board, Kayak equipment, Sail dinghy boat)
Upon embarking the ship, we will continue our journey to the Island of Brač where we will overnight!

Breakfast on board of the ship. After breakfast, we explore island culture, history, gastronomy and life. During our Brač gastro tour we will taste olive oil, finest of Brač wines, locally grown lamb meat and take a hike through beautiful island scenery.
Firstly we will take short transfer to a charming restaurant located in olive orchard. Here we will enjoy olive oil tasting. You will have an opportunity to learn about traditional olive oil production, new techniques and differences in the taste and quality. After that we will take an enjoyable walk to the restaurant famous for its locally grown lamb meat where we will taste lamb specialties that are in season at the moment. Finally we will end with wine tasting in award winning winery where we will taste three reds among which the star of Brač wines – plavac mali sort. For those more active hiking or biking to Vidova Gora mountain, the highest point of Brač, are included. It is also possible just to relax on the boat and meet with the rest of the group on the most famous Croatian Bol beach later on. In the afternoon we will set sail to our night port on the island of Hvar (Hvar Town) where we will spend the night.

Breakfast on board. The Greeks, Romans, Byzantines, Slavs, Venetians, Austrians, French and British have been the master of Vis island. Major naval battles took place in 1811 when the British defeated the French and in 1866 when Austrian navy defeated Italy. During the Second World War the island was at different times under the control of Tito’s partisans and played the important role of the British Military Mission Headquarters. During the Cold war the island was a military base to which access was strictly controlled and it was only in summer 1989 that the island opened to foreign visitors. A tour will be organized for you to see all this. Departure from Komiža or Vis, after a 20-minute drive we will reach cape Stupišće where a former cannon and rocket base is located. We will pass through the labyrinth of underground tunnels, see the remains of cannons and abandoned warehouses. After a tour of the rocket base Stupišće, we will continue driving to the next military tunnel ARK Vela glava. A tour of the tunnel, then ascend to the highest point of the island of Vis – Hum peak (587 m). We will enjoy the view of the surrounding archipelago and town of Komiža and visit the small church St. Spirit. By return, we will take a short walking tour of the well-known Tito’s cave. In the afternoon we set towards the island of Mljet.

Breakfast on board. On Mljet we will have optional activities like biking or hiking through the national park of Mljet. Mljet is the eighth largest Croa-tian Island, situated near the peninsula of Peljesac, Dubrovnik and Korcu-la. It is characterized by a Mediterranean climate, dry summers and mild winters with approximately as many as 2500 hours of sunshine per year, making it one of the sunniest Adriatic islands. Beautiful scenery, crystal clear sea, lakes, islands, rich cultural heritage make the island truly para-dise on earth. Situated on the island of the same name, Mljet National Park is the most important protected area of the Dalmatian south. It is the oldest National Park at the Adriatic. The park covers the western part of the island, which many regard as the most alluring in the Adriatic, full of lush and varied Mediterranean vegetation. The park includes two deep bays which, due to their extremely narrow links with the sea, are regard-ed as and indeed named lakes: The Great Lake and the Small Lake. This day is designed to offer plenty of relaxation and enjoying the beautiful nature of the national park. In the late afternoon we set sail to Dubrovnik.

Breakfast on board. After breakfast meeting with the local guide for Du-brovnik sightseeing. Local guide will take you to the most wonderful and hidden streets of the Dubrovnik. Dubrovnik is one of the world’s most stunning destinations, both in terms of its cultural heritage and as a holi-day destination. The city has often been referred to as the “Pearl of the Adriatic” and was inducted into the UNESCO World Heritage List in 1979 as a city of rich culture and history. The Old Town of Dubrovnik is sur-rounded by 1,970 metres of city walls—over the centuries they served to protect the city from various threats and today are the city’s greatest attraction. The Pile Gate and the Ploče Gate are connected by the main street, Stradun, and form the entry and exit points to the city walls and the old city itself as well as its museums and theatre scene. Besides its wealth and diversity of history and heritage, Dubrovnik is also a city of top culinary delights, stunning natural surroundings and cordial inhabitants, so set some time aside, explore the possibilities the city has to offer and feel the spirit of this ancient city. Explore Dubrovnik City Walls and enjoy a unique view of the Old Town of Dubrovnik including its narrow streets and small squares, shop on the Stradun street, and explore Game of Thrones locations. After the tour you will enjoy the world famous Dubrovnik city walls, or as an alternative take the cable car to Srđ mountain for great views of the city. In the afternoon we set sail towards Korčula.

Breakfast on-board. After breakfast we will visit some wineries and olive oil production sites. Korcula is well known as a wine producing island, famous for its homemade wines so a visit to this island wouldn’t be complete without tasting the local red and/or white wines and sampling a traditional snack. The wine tasting tours offered on the island include visits to local wineries in villages of Lumbarda Cara and Posip where white wines Grk and Posip are traditionally produced for centuries. The cycling and wine tasting tour will depart from Korcula Town and you’ll cycle through the small town of Sv. Antun passing through the countryside with stunning views along the route overlooking the Korcula Archipelago. You’ll visit two family run wineries all producing Grk wine that have been passed down through the generations, some as old as 200 years old! After the winery tour you will be transferred back to the ship and we set sail to Split. 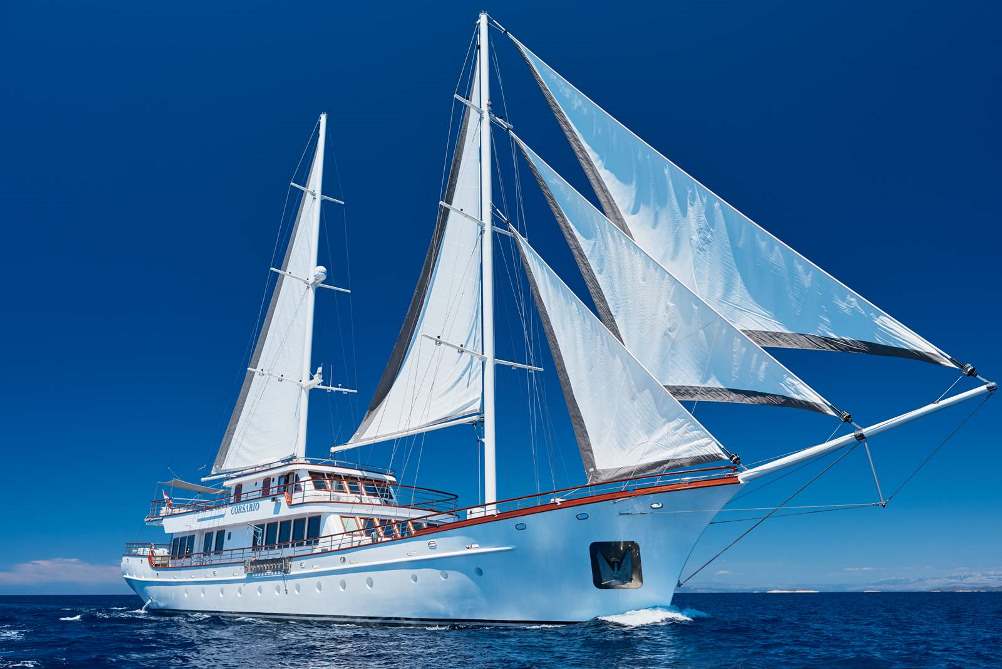 There is surely no better way to see and experience croatian coast and islands than by boat. Our Croatia sailing itineraries let you enjoy some of the world's most beautiful islands and beaches, with numerous opportunities for swimming, relaxing and having fun, as well as active and exciting land activities like hiking, kayaking, snorkeling and guided tours on Croatia's best island destinations.Croatia Island hopping on famous islands like Hvar, Brač and Vis is one the best and most fun ways to see this part of Croatia. Sail through these islands and have an opportunity to see the hidden beaches, secret coves and bays, taste authentic cuisine, see breathtaking scenery and have a great active adriatic holiday.

Here are some of our sample itineraries:

7 nights on board of boat M/Y President
President is 47 meters long boat with capacity of 40 people. It’s spacious and VIP cabins, sun deck, big dining area, fitness room and a swimming pool make it a preferable cruise ship. With the launching of this ship in 2012, a new "ladder has been reached", a new type of cruise has developed - deluxe cruise. The overall length of this ship is 47 meters and has a total capacity of 40 guests + one tour guide. There are double and twin bed cabins. There is one cabin on top deck, 12 on main deck and 8 under deck. All cabins are spacious en-suite (shower/wc) with Air condition, TV/SAT, safety deposit box, hair dryer and basic hygienic accessories. Among the cabins on the main deck there are two Vip cabins that are more spacious with a sofa that can be made as additional bed. These cabins have a separate entrance. The ship has a big indoor dining area of modern design and clean lines situated on top deck as well as a lounge area at the stern of the ship. There is also a sun deck, a small fitness room and a small pool incorporated into the hull of the ship at the stern. There is also Wi-Fi on the ship.

*Dinners in harbours, not included in price 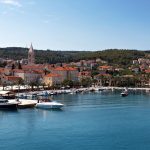 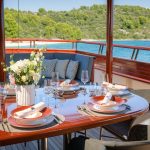 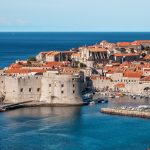 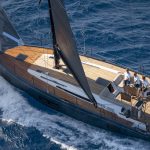 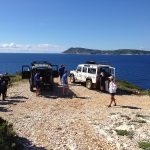 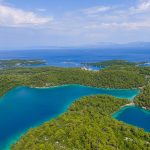 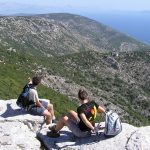